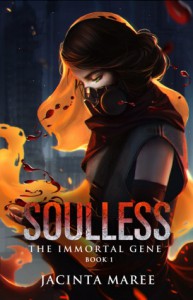 "Immortality. What was once a magnificent dream has now become our grim reality. Man no longer fears death; he yearns for it."

This book was a roller coaster ride (and thus hard to rate). The start was exciting and complex, the middle slowed to a boring lull and just when I was looking for my coffee to keep me awake and interested... BAM! there came the ending. The premise was extremely unique, the writing was very good but it needed some major editing. There were times where the wrong tense was used and places where words were omitted completely. It didn't detract from the reading too much but it was a minor nuisance. More importantly, the characters were not only likeable but relatable (even with them entrenched in a palpably dark dystopian world). The world building was incredibly detailed and rich that I felt like I was immersed 100%. That was true until around 50% (ish). Around then I was slowly starting to page watch, hoping that the numbers were growing faster than my notice (NOT a good sign)....BUT...The last 15-10% renewed my interest and increased the ongoing rating in my brain. It is a strong foundation for what will hopefully be an incredible series.

Here is a long quote that sums up the book's premise perfectly:

"The world had turned to waste; immortality was never meant for man and it drove humanity to the edge of destruction. There had been plenty of stories about how the human race would end. Unlike the movies from Hollywood, there was no big bang like a sun exploding; there was no catastrophic moment where our world was flipped upside down like in a nuclear war or zombie virus outbreak. It was gradual, like a seeping virus that withered everything within its path until it ground us down into brittle, hollowed cores. It wasn’t out to destroy our bodies; it destroyed everything we once treasured. Hope, love, compassion, joy… even our mortality. It was all gone. And now it mocked us with a peace we could never achieve, death"

I highly recommend this book to Dystopian readers, lovers of a good Saviour's journey along with anyone interested in finding a well written, fascinating character driven, uniquely premised YA novel. It really is a good start to the trilogy (slow spots and all).