great down to earth writing but no feels 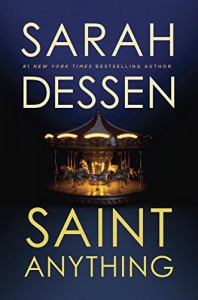 Let me preface this by saying that this isn't necessarily my genre of choice I thought I'd try something new(ish) so I might be off a bit with the review and subsequently my rating. That being said, Saint Anything was my first introduction to Sarah Dessen. Man she knows how to create a character that you can easily picture in your head. YES this feels like a light romp, not an aggressive spelunking trip through the fathomless pit of my Feels. YES the character's didn't elicit the deep emotions that I was SURE Sarah had intended. YES a story about a beautiful rich girl who has loving (albeit biased) parents and an awesome network of friends plus a SUPER hot boyfriend didn't evoke any sort of pity on my end, instead it elicited a heaping load of belligerent eye rolling. BUT the writing is simple yet compelling. It is tangible, completely relatable, and the characters all had such distinct voices that I couldn't just disregard them while speaking of how little I felt for the storyline. The parts I most liked were: watching the fluidity and vacillation of the family dynamics as well as witnessing the fleshing out of the characters and their idiosyncrasies. These quirks made them feel unique and alive. There was no crazy drama though. There was no spark between her and her boyfriend or gut wrenching depression over Mrs. Chatham's ailment. There were some dark elements but by dark I mean nightlight on, door open, sun beginning to peak into the windows sort of dark. I get that her brother's actions resulted in a tragic mess and that Ames was the dirtiest part of the book BUT I felt like I was just witnessing a story, not eviscerating alongside some of my newfound best friends. Maybe I expected too much but after seeing the average ratings of 31,477 people being 4.05 I was SUPER excited and ultimately, MAJORLY let down. I will repeat though that the dialogue and depth of EVERY character was written so well and so naturally that I can see how Sarah Dessen is held to such a high esteem. Although...good character writing alone can not make an exalted book imho. If you like your YA, Coming of Age, completely character driven, bag of teenage woes to be mild and unassuming look no further, you have found the one. Will I check out another of Mrs. Dessen's books?? I might but there's no immediate need to run out (or order it online while sitting comfortably in my favorite recliner) and buy them.