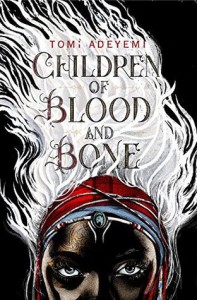 This book was hyped SO much that my trepidation had trepidation. Yes, the premise had LOADS of potential but it still could have squandered or floundered or other "erds"....BUT when I got to about the halfway mark I let go of the breath I was holding and just enjoyed the ride without over-thinking things. That is not to say that the beginning was slow or uninteresting, it just didn't command my attention like the second half of the book did.

This story, was told in an accompaniment of 3 POVs that worked together seamlessly. I loved the character evolutions and the ever-changing dynamics between the trio. This had an awesome hate to love friendship that truly felt organic and plausible. The gamut of feelings our kick @$$ Maji heroine Zellie ran through were undeniably visceral. Her conflicting emotions, with respect to the Prince, felt plausible though incredibly unlikely. Prince Inan's feelings for Zellie made a bit more sense, especially considering his unique skill set, and it really was satisfying watching it all play out. Amari turned out to be a really fantastic character/ally/sister/love interest?!? The tertiary characters were not only relatable & likeable but profuse to boot. Tzain was everything a brother should be (and more) and his unyielding love for his family was tender yet fierce. Diametrically opposed to Tzain's character was the vile King Sarran who made it oh so easy to root for his demise. The ending was a bit cliffy BUT still gratifying. I may have even shed a tear or five when the action was all over and the casualties tallied.

All in all it was a fun read. Did it completely live up to the hype? Welllll...kind of,