Dance of Thieves- slow beginning but SO worth it in the end!! 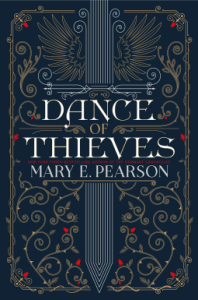 I've got to be completely honest, the first time I started this book I didn't like it. I thought it was boring and a bit trite BUT I wanted to give it a fair shot so after a short hiatus I plunged right back in. The second time around it felt like I picked up a completely different book. I'm not sure if it was just the headspace I was in or if the story just needed a little more time to come together BUT whatever the reason, the change was dramatic. So, if you are stalled in the beginning and are questioning its worthiness then I am here to advise you to dig in and keep going because it is SO worth it!!

I absolutely LOVED this book!! Is there a yummy romance? Yes! Is it an insta-love? Heck no and thank the literary gods for that because it was a hate --> love slow burn, just the way it should be. Did it manhandle and overtake the entire plot you might ask? I'm happy to report that it was just the right amount of Amore. Though there were no sexy-time scenes the rapport was sweet yet palpable.

Did I mention the writing? WELL the writing turned out to be far from trite. It was compelling and sonorous though not so cutesy as to be nauseatingly saccharine. I also loved the riddles, especially the last one, they were well worded and helped move the plot in a fun way. I have to admit that I have not read the Remnant Chronicles (yet) but after having been gifted and then devouring this book I will definitely be checking out the previous series which happens to be set in the same world AND what a world it is!! There are assassins and cowboys and dirty captains/magistrates/cousins/kings(?!?) et al. There is Love and betrayal and devious machinations abound AND did you say you like your characters armed and dangerous? If you're in the market for some kickass female characters then this book is for you! The world building is lush and the characters are expertly crafted. I loved SO many of them I won't give a list BUT I will give honorable mention to our two MCs, our dueling POV voices, swoon worthy Jase and our uncommon thief Kazi...they were both beatific/ relatable/damaged/imperfectly human and their trials (as well as their budding affection for one another) felt torturous...in a good way.

Overall, this was such a happy surprise that I am both kicking myself for not reading it sooner and glowing because I got to savor it longer. I dreaded reaching the end and MAN what an ending it was! Warning: there is a cliffhanger so if you are not into stewing in a batch of What-if(s) for a while then maybe you should wait until the next book is out before starting this one...BUT definitely start this at some point, you won't be disappointed!! Personally I'm going to sit in a corner and stew until August 2019 when book #2, Vow of Thieves, comes out.