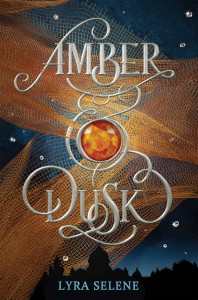 This book...oh this book... this was a mixed bag of emotions for me. If you have ever read any of my more verbally flamboyant reviews you'd know of my devout love affair with lyrically verbose literary musings. This type of author usually has me waxing poetic (or trying to). Amber & Dusk was undeniably picturesque! It was eloquent in ways I am not and the writing was equal parts delicious... and...well... loquacious. The Character and World developments were both beautifully crafted. The scene depictions were resplendent but I often found myself outside of/apart from/not one with the characters or any of their plights. Instead of being immersed in the "what the heck is happening and what's going to happen next?", I was more in the arena of "who cares who's doing what to whom? Look how sparkly and pretty this sentence is!" Scenes were lost in the grandeur of the description proving the sentiment that sometimes more is just...well...more. At times the tone flip flopped between robust imagery and mottled mess and when that happened I found myself unceremoniously booted right out of the flow...not cool! Even I believe there's no sane reason to use 2 overtly saccharine sentences to describe a rock BUT somewhere along the way, around the two thirds mark, I found myself absorbed. I finally started rooting for/against characters and worried over their wellbeing. Progress!!!

I guess I love the bad boys though because Sunder was the first character to resonate with me and I loved him from his very first appearance. Now Mirage, on the other hand, I was on the fence about her. She longed for a place to belong, to fit in, and the first time she was offered a life of acceptance, Family and Love she refused it without even a spare thought. This rang false with me. She had no idea what her fate/future held instore for her yet she flatly rejected an offer of total wish fulfillment??

Anyway, imho, the most interesting part of the book was the spectrum of Legacies and the backstories telling how and why they manifested in the ways they did. It was exciting to suss out, especially with respect to the Empress. All information about her abilities/vulnerabilities (or lack there of) was withheld from both characters and reader alike.

Now back to Sunder... it has been a few minutes, at least here in my head, and I believe you should know a bit more about him and the burgeoning romance (or two) in the story. Don't worry, they were present but SUPER tame. The main one was EXTREMELY slow to brew and seemed like a tiny drip blip on the action-meter. This, of course, was frustrating... BUT... at the end there was a tiny flicker of hope in my heart, that I am currently stoking feverishly, wishing redemption, acceptance and most importantly HEAT in future books...fingers crossed! Sunder, you are a tortured soul but you have yummy, hidden, secret, noble ideals and intentions that I can't get enough of...I'll Love You if Sylvie/Rina/Mirage won't (and even if she will)!!

The showdown at the end brought the anticipation to a crescendo even though it was wildly unsatisfying and ended in more of a limping whimper than a resounding bang.

SO, did I fall hopelessly in love with Amber & Dusk? No BUT by the end I did fall in strong like with it and I will definitely look out for the next book in the series.