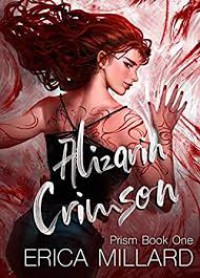 This is a good, solid read. The premise is semi unique. I say semi because there are a lot of familiar tropes and they are sprinkled liberally throughout. Tropey things like (but not limited to):
- Hostile/warring sects of people who possess extraordinary powers, who are hell bent on world domination and who parrot Magneto's rhetoric nearly verbatim.
- A coming of age arc for our MC, Aya, who is trying to explore her newfound abilities while also being on the run/trying to duck those who are seeking to exploit those emerging abilities.
- An MC that is multitasking all the while by testing the boundaries of her capabilities, navigating the minefield of budding teenage hormones and traversing the globe, with a hot guy in tow who is totally into her (or is he?!?), National Treasure style.

Aya has a very unique Power, she's a Colorist. This particular Talent is incredibly rare, super powerful and, unfortunately for her, highly sought after. It had never before been encountered by those in the book as well as by us literary voyeurs ... outside the book. Our protagonist grows steadily, not only in ability but in maturity as well. Her curious, often times deadly, and very poignant experiences are her catalysts for impressive growth. She begins to transition from naive child to weather weary woman by the end...as all good tropey heroines do. My main gripe is maybe just a splash in the bucket but it niggles, and itches and it just doesn't sit right with me... I won't spoil anything but to say that it involves Aya's name being known (and invoked) by a certain person in the (way back in the day) past, an ability that was soooooo far out of his Talent wheelhouse as to be beyond improbable. This wasn't explained or even discussed as highly iffy but was brushed aside with one or two "huh, that's weird"s. Oh well... it might be addressed in later books but I'm not sure if I'm into this one for the long haul, even if it's just to find out what's up with that pet peeve.

Overall: If you're looking for a solid read with fleshed out characters and good writing... A plot that revolves around: Characters who possess extraordinary (varying) abilities who fight one another for the chance at global domination. Characters that travel the world in search of ancient artifacts... relics that are destined to give one sect the ability to rule over the Normies and whose whereabouts are determined through criptic clues. Then you can't go wrong with this book!

Also, you might like to know that book #2 (Cobalt Blue) is ready and waiting for you as soon as you are finished with this one. It's always nice to be able to pick up directly where the first book left off... while the character's names and the plot's twisty bits are still fresh in the noggin. Will I proceed to Cobalt Blue? Hmmmm, I'm on the fence about that especially since I am light headed and giddy from a sudden influx of much hyped, highly anticipated reads that have recently moved from my Preorder list to their forever home in My Library. I don't know if this story will have the lasting power, that lingering whisper enticing me back to it over the roaring cacophony of the other book's plots. Only time will tell BUT please don't let my indecisiveness deter you from picking this one up, I can be capricious like that sometimes. In any case, this book is a 3 stars read that I suggest to anyone seeking to spend a few enjoyable hours escaping into another semi unique Reality.