Queen of Nothing by Holly Black 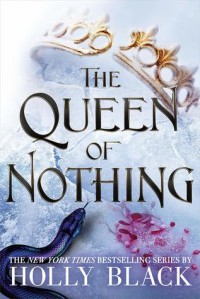 The One. The Only. Mrs. Holly Black. Has done it. AGAIN!! This isn't a drill! This powerhouse of a writer has consistently wowed me and I never tire of her voice. I don't know why I worry where these stories are going when they're in her exceedingly capable hands. This final installment in The Folk Of The Air series is everything I was hoping for, and even what I secretly wished for, in the wee hours, pleading to whichever deity would listen, asking for a satisfying ending AND did it work?? Again, HECK YEAH!!

Holly Black is a master wordsmith and it shows. She has a deliciously talented mind that has yet to disappoint. This book has it all!! It has courtly intrigue, war, betrayal, Love, hate, deviousness, devotion, selfishness and salvation, filial drama and siblings working together as one cohesive unit of badassery!... and really, what more can you ask for?? I don't want to ruin a single moment so I'll leave things as vague as I can but I must gush where gushing is due. Here's a brief, fanatical, rundown of the goods.

There is, of course, Jude Duarte who is an ultra kick ass heroine with major Daddy issues. If I could be any literary female character, she'd be in the top 3, maybe even #1... She is clever. She is devious. She is strong even when she doesn't believe herself to be and especially when others underestimate her fortitude. She is loyal. She is as fair as a human living in Faerie, cavorting with the Fair Folk can be. She is merciful(ish). She is Oh SO Human and a slew of other powerful adjectives. BUT most notably, in The Queen of Nothing, we see a new side of her, she is vulnerable in an incredibly realistic way. She does Vulnerable with a healthy serving of doubt, a dollop of self consciousness and all sorts of reticence and sublimation. I at once feel for her and want to be her. She is the backbone of this amazing tale and an inspiration for girls everywhere!

Naturally, afterJude we should mention, in the same breath, with the same reverence, King Cardan. Cardan who almost shares the spotlight equally with Jude AND who, in my (double heart eyes) opinion deserves to be given as many accolades as the girl/woman/queen of the hour. Cardan who I can't EVER get enough of even if I had a slow flowing IV drip of him inserted directly into my body, rationing out portions of him so I may enjoy his company longer (in a non-creeper way of course)... I would ask for it to be opened up to full throttle... I need MORE MORE MORE of him (again not in a creepy stalkerish way) especially QoN Cardan!! The Cardan we get in this hyper vivid finale exhibits many of the same qualities as Jude plus he can even be a (not so) little monster to deal with. Both he and Jude prove that wishing on the literary stars, hoping and praying with fingers crossed for perfectly concluded character arcs is not completely futile.

Now, speaking of futile, you'd naturally go straight to Taryn, Jude's morally questionable twin. In this book Taryn manages to crawl out of the Shitter, take her name off the Shit List and redeem herself. She elevates herself to proper sister material worthy of the freakishly amazing affection of her siblings. She now IS the shit BUT this review is taking a turn so enough shit talk for now.

Back to the book's ethereality...

Holly Black can frame a scene almost like no other. You'll believe yourself transported, living inside the story instead of watching it from on high. The World building is beautific but the Character Development is phenomenal. This cast is diverse and robust and fully tangible in all their flawed/awesome/majestic/magical glory. The writing style is typical Holly Black and by that I mean it's sublime. The Audible narrator was Caitlin Kelly who happens to breathe life into each and every character so completely that I no longer found myself passively listening while doing my chores. Instead I was in among the action or like a movie was being performed in my mind. Caitlin plays each character so distinctly and with such conviction, I could actually see the person's lips moving in my mind and the action was palpable. She is the perfect accompaniment to Mrs. Holly's brilliance. All of these factors put together create an overall experience that is intoxicating. At once I both craved for things to speed up so I can find out what's next and concurrently needed things to slow down so I could savour every moment. The epilogue was longer than most and Oh SO Good! I have been feeling rather blasé about books relating to the Fae this last year or so but Mrs. Black can (and did) make a converted zealot out of even the grouchiest of cynics.... aka Me.

Here I am, the sole family member awake, in my eerily quiescent home, begging for just a little more time in this world... with these characters... with this author. This foray into the land and lives of the Fair Folk was enjoyable on a catastrophic level. I have been demolished (in an amazing way). I wish I could start this book over, with fresh eyes, and experience it anew as if it were my very first time. I envy you, sitting there perusing these reviews, debating on whether or not you should devote your time and emotions to this book. I envy your naiveté, your purity, your newness but most importantly I envy your innocence!! If you've read the first two books and are on the fence with regards to this last paragon then what are you waiting for?? You NEED this (audio)book in your life toot sweet! If you just tripped and blundered your way onto this scene by happenstance then you really need to read both proceeding books... you'll be lost in the sauce without them. Let me (hopefully) be the first to skip the slow clap and jump right into the rapid-fire hand slapping of utterly devoted fandom... it deserves... nay, it DEMANDS it and rightfully so! I'm in love! You will be too, I'm certain of it! Join me! You'll thank me later!!