Court of Miracles by Kester Grant 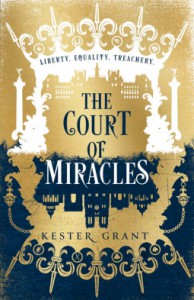 YESSSSSS!!! Now THAT was entertaining! It was full of all sorts of good stuff like loyalty and betrayal, suffering-revenge-retribution (?), a tame love(ish) quadrilateral and most of all Hope. Hope was sprinkled about, a little here, a smidge there. It was an ember in the darkness and the inspiration behind almost every action our MC took.

Another major motivation for our MC was the notion of Family. The word was stretched and tested and redefined multiple times. The concept's metamorphosis was intriguing. It was powerful, pure, gut wrenching and an integral part of the story. The pull of it felt something akin to ogling a devastating car accident... sure, some of its appeal is the taboo act of staring at it... sure, lingering about, almost to the point of obsession is frowned upon but man oh man what an endorphin thrill it can be. Rubbernecking, this compulsive urge to witness the curious, is the #1 cause of accidents on the road (a stat that I 100% did (not) research before stating it here) and appeals to the average Joe and the kinky vouyer alike. BUT I digress... often :-)

Up next is the world building. The world building was immersive and had me feeling like I was living alongside the characters... a participant rather than a spectator. There was a glaring juxtaposition between the dirty, gritty, (mostly) Street Law abiding Wretched poor versus the aesthetically beautific yet festering and fetid to the core elitist Gentry. The obvious duality between the classes was equal parts stark, palpable, visceral and tangible. Their dastardly interplay played nicely off one another and was showcased brilliantly by the organic and authentic writing.

Then there were the Characters themselves. The characters were all so deliciously ambiguous and angsty (for good reason), and so humanly gray that I couldn't help but love-loathe, adore- abhor each and every one. AND when I say every one, I mean absolutely EVERY character (protagonist and antagonists alike) was dynamic. There were a couple of people I wish we got to know more about BUT isn't the anticipation and craving for more part of the allure?

Allure, allure, you'll get you're fill here. I am always all in for the morally questionable, quasi-heroes. The ones who are atypical but fit the role if you turn your head a little to the side and squint a bit. Our MC Nina (aka the Black Cat of the Thieves) happened to fit that mold to a T. She was strong yet vulnerable (especially when it came to those she loves). She was a badass, no nonsense force of nature that refused to back down from anything or anyone! She scratched and scraped, fought and spit fire (not literally) in order to achieve her lofty goals... no matter the circumstances... consequences be damned. Her amalgamated traits worked. Nina was fierce, street smart and adroit with whom she let in. She didn't flinch in the face of hard decisions and was resolute in her convictions... determined to the point of obsession. When the stage shifted without warning, she adapted... transformed... she shed her Victim mentality and became the Nothing Can Stop Me Thief/Holy Avenger of the Night (in spirit not in name). She was able to get into any place and steal/liberate almost anything/anyone. Her undeniable appeal is a testament to how well Kester Grant's characters are crafted and the entirety of this paragraph is a mere scratch on the surface of just one single character... imagine the indepth cast you'll meet if you give this gem a shot... I'm a betting girl and I'm betting that you won't regret the decision.

I absolutely adored this book. When I finally freed up the time to read it, I devoured it! I wish I had taken my time with it more but it had me so wrapped up and dialled in that slowing down and smelling the proverbial roses just seemed like an impossible task. I couldn't seem to slam on the brakes to savoure it the way it deserved and that's unfortunate... Unfortunate because my Trifecta of Awesomeness ( writing + world building + character development = the perfect read) was both met and done so effortlessly. There were some harmless editing faupax but since I was graciously gifted an Advance Reader's Copy, I am confident that they will be remedied before the final publication. All in all I couldn't be happier with my time in this world, with these poignant characters. I definitely think you should give this one a go, I'll wager cold hard (virtual) cash that you'll enjoy your few hours of escape!